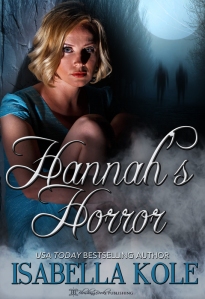 USA Today Bestselling Author, Isabella Kole, brings you this romantic mystery just in time for Halloween! Let me tell you a little bit about it! The story is made up of three vacations over the course of a summer. The first one is in Iowa, along the banks of the Mississippi. Some of the supernatural things that take place in the story actually happened to the author… The second trip is in the mountains of Tennessee, and the third takes place in Myrtle Beach. Two college girls, one with a gift she isn’t sure she wants, and their boyfriends find themselves involved in some strange and dangerous situations. This is a spicy romantic mystery.

A blessing or a curse? That’s what Hannah Stone can’t decide about a special gift she’s been given.

When Hannah and her best friend, Cassie, joined by their boyfriends, set out on one last fun-filled summer of vacations before beginning their senior year of college, they have no idea just how adventurous the trips are going to be.

An old inn that sits along the banks of the Mississippi holds a secret or two, and Hannah finds herself in the thick of things, much to the disapproval of her protective boyfriend. When he reveals his dominant side to her, will it turn her off or endear him to her forever?

The Smoky Mountain trip, where unknown dangers are hiding, turns out to be a life-changing experience.

And the last vacation…a relaxing beach trip…may be the one that convinces her the ‘gift’ is a rare and treasured blessing.

The man watched as the car backed out and headed down the mountain. Now was the time. He’d been watching the cabin for several days. He’d thought he had it made with two young women alone there, but then those two had shown up.

He was in need of a shower and food. Roughing it in the mountains was not his idea of a good time. He’d managed to fool those two men the night before, by cleaning up in a stream, but he wanted a real, honest to goodness, steaming hot shower.

He stepped onto the deck. The hot tub looked inviting, but he had other ideas. He checked the door. Damned bitches had locked it. He took a pocketknife out of his pants pocket and jimmied it until it gave for him. Opening it quietly, he stepped inside the door, which led to the kitchen. Where were they? He looked down at the rope in his hand. Stupid boyfriends or husbands, whatever they were, had even supplied him with the rope. He laughed to himself.

Ah, the redhead was sitting in the room with the fireplace, reading. Perfect! He crept up behind her and placed his hand over her mouth. Whispering in her ear, he said, “Stay quiet, little one, and no one gets hurt. I am going to borrow your shower, and then you and your little blonde friend are going to fix me a meal. Got it?” Cassie nodded her head. He removed his hand and waited while she fought the urge to scream.

“Atta girl, now point me in the direction of the shower and get me a towel, now!”

Cassie got up on shaky legs and led him into her room. She pointed in the direction of the private bath and told him the towels were on the shelf.

“Just to make sure you don’t get any ideas about running, I am going to have to tie you up, girlie.” He came toward her with the rope. Cassie took a step back, but he was quick, and he grabbed her wrist, flung her around and sat her down hard on a chair. He tied her wrists and ankles with the rope and sneered at her as he went into the bathroom. He picked up a scarf that was on the counter and returned to the bedroom, gagging her so she couldn’t scream.

Cassie looked around. Oh God, was he Sam? Where was Hannah? She had said she wasgoing to take a nap. Damn it, Hannah, wake the hell up and go get help while he is in the bathroom!

In the next room, Hannah was still sleeping soundly. She woke slightly and could vaguely hear the shower running in Cassie’s bathroom. Why was she taking a shower now?

Groggily, she sat up and looked at the clock on the bedside table. It was eleven o’clock. The boys should be back for lunch soon. They had gone to town for something.

And then she saw her. The girl was standing at the foot of her bed. “He is here, Hannah.”

What? He was here? Where? He couldn’t be in the cabin. She must have meant he was here on the mountain.

Hannah went into her own bathroom and splashed her face. She brushed her teeth, applied light make up and fluffed her curls with her fingers. Then she went into the kitchen to make a fresh pot of coffee.

She was just about to pour a cup when he appeared. The man walked out of Cassie’s bedroom and said, “Oh, good, I feel like a new man after that shower, and now, you have fresh coffee all ready for me.”

“Wh-who are you? Where is Cassie? How did you…”